As young people grapple with understanding and finding ways to dismantle the systemic racism entrenched in American society—so clearly and brutally exposed in the recent murders of Breonna Taylor and George Floyd—educators are in a powerful position to guide them toward resources that illustrate and give context to these inequities. This Curriculum Connection, originally published in March 2020, supports you in that mission. Stamped not only illuminates how racist practices have played out in American history, it also offers a new generation of readers tools with which to identify and call out racism in their daily lives.

SLC's Educator Guides bring you a go-to set of curated resources, lesson plans, and author insights to help you introduce and share quality literature with your students and teachers. Books are selected by SLC's editing team based on advanced copies of the titles and reviews from their school librarian reviewers.

Click to Enlarge +Stamped: Racism, Antiracism, and You Educator Guide

From New York Times bestselling author and National Ambassador for Young People's Literature Jason Reynolds and award-winning scholar and New York Times bestselling author Ibram X. Kendi comes Stamped: Racism, Antiracism, and You (Little, Brown 2020). This YA "remix" of Kendi's National Book Award-winning Stamped from the Beginning (Bold Type Books 2016) has a younger readership in mind in its accessibility and energy as Reynolds lays out the history of racism and racist ideas in America and their enduring political, social, and cultural manifestations. 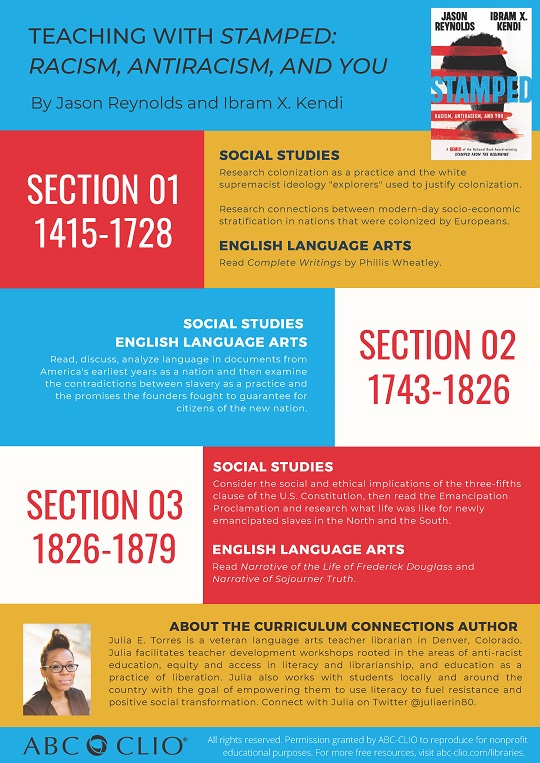 In the end, Stamped challenges our notions of what it means to be racist. It reimagines what it will take for this country to become antiracist through a thorough and skillfully crafted counter-narrative to the history so many of us think we know.

is a veteran language arts teacher and librarian in Denver, Colorado. Julia facilitates teacher development workshops rooted in the areas of anti-racist education, equity and access in literacy and librarianship, and education as a practice of liberation. Julia also works with students locally and around the country with the goal of empowering them to use literacy to fuel resistance and positive social transformation. She is the current NCTE Secondary Representative-at-large, a 2018-2020 Heinemann Publications Heinemann Fellow and Educator Collaborative Book Ambassador. Connect with Julia on Twitter @juliaerin80