We're glad you're enjoying School Library Connection.
Access the rest of SLC & thousands of more resources like this one.
Already a subscriber?
SIGN IN
OR
Learn how to become a subscriber here.
Meet Ruta Sepetys, Author of The Fountains of Silence

Click to Enlarge Meet Ruta Sepetys, Author of The Fountains of Silence

Each month at School Library Connection, we set out to select an outstanding author and title from our current list of reviews to highlight as our "Author of the Month." This month, that author is Ruta Sepetys. Ruta is an internationally acclaimed, bestselling author of historical fiction for adult and YA audiences. Her books have transported readers to some of the darkest chapters of the 20th century, from the frozen gulags of Siberia (Between Shades of Gray, 2011) to a doomed World War II refugee transport (Salt to the Sea, 2016). Running through all of her stories are themes of courage and resistance in the face of war and oppression, and the resiliency of ordinary people who find themselves confronted by extraordinary circumstances. True to these themes, her latest novel, The Fountains of Silence, explores the period of fascist repression in Spain following the rise of dictator Francisco Franco in 1939. The book is an exploration of the power of ideology, the corruption of censorship, and the importance of human compassion. Read SLC's interview with Ruta below for a deeper dive into the historical inspiration behind the novel; you can also read SLC's highly recommended review of the book here.

This question is of great philosophical significance, so I have to preface this by saying that my reply is simply personal opinion. But in a word, if we drill down to the root, I think the answer involves—fear. All of the dictators you mention put very strict systems in place that controlled the population and favored the State over the individual. Whether fear of disagreeing with those in power, fear of returning to a previous hardship, fear of taking responsibility for your own destiny, fear of repercussions, fear was at the root of civilians who blindly followed. Hitler and Franco rose to power following crippling, post-war economic periods. Some people craved stability that the leaders were supposedly offering. Those who worked alongside totalitarian leaders enjoyed special benefits that did not extend to the rest of the population and they didn't want to lose them. 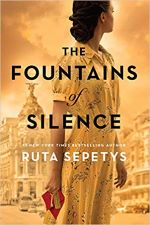 Click to Enlarge Meet Ruta Sepetys, Author of The Fountains of Silence

The Castellana Hilton was the first Hilton hotel in Europe. Formerly the palace of the Duke de Aliaga, in 1950 the palace was rebuilt as a hotel. The eight-floor structure, referred to by Hilton as "Your Castle in Spain," was inaugurated with a glittering grand opening party that lasted three days and three nights and was attended by Hollywood elite including Gary Cooper, Ava Gardner, and many others. (There's a fabulous account of the grand opening in LIFE magazine.) In the late '50's, countless American tourists were flooding into Madrid. Historic hotels, like the Ritz, frowned upon Americans and their rowdy behavior. But the Castellana Hilton welcomed the likes of Bette Davis, Frank Sinatra and even tolerated the shenanigans of actor Marlon Brando, who slaughtered live ducks in his room at the hotel. When I decided that the story should be partially told through an American lens, the setting of the Castellana Hilton was the obvious choice. The hotel is now the Intercontinental. My publisher in Spain connected me to the hotel director and she was incredibly enthusiastic and helpful. She toured me through the entire hotel, allowing me to explore every last corner, in order to create a believable setting for the novel.

Some reported that Franco was benevolent. I think that was a misconception. Through my research I learned that Franco's tactics did change a bit over the years and that allowed him to redefine himself and improve his reputation and legacy, but the violence and punishment against men and women who opposed him was anything but benevolent. In terms of a misconception that still exists today about the time period, many think that the U.S. promoted tourism in Spain simply because it was a romantic destination of the time period—a land of sunshine and wine. It was much more complex.

There's still a bit of debate around the U.S. role in Spain during the time. Franco remained neutral during World War II but did align and communicate with Axis leaders. President Truman wanted absolutely nothing to do with Franco and Truman's memos on the subject are extremely frank. President Eisenhower didn't much care for Franco either, but signed the Pact of Madrid in 1953 during a time when much of the world criticized Franco's fascist tactics. The Pact brought financial aid and tourism to Spain. In return, the United States was permitted the installation of American military bases in Spain which gave the U.S. a geographic position against the Soviets. Some argue that American dollars and tourism in Spain helped the Spanish people and gave them a window into democracy. Others argue that the dictatorship would have died an earlier death if the U.S. would not have been involved. So it's a misconception that Spain was a tourist destination in the 1950's and 1960's simply because of the weather. :)

The socialization of silence. Living in a culture of fear. Ideological pressure. Demoralization. Identity corruption. Memory politics. Innocent children inheriting responsibility for something they had no role in.

It's an important period to study for several reasons:

I hope the book might inspire readers to research the history further and generate compassion toward the complexity of the time period. Novels have the ability to bring groups of people from different backgrounds together, uniting them in story, study, and remembrance. By acknowledging difficult history, perhaps we can restore dignity to those who experienced it.