Meet Joshunda Sanders, Author of I Can Write the World

Author of the Month 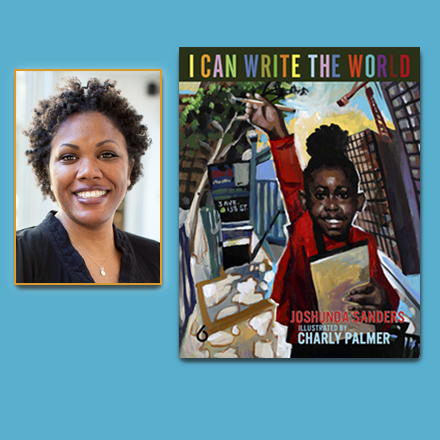 Click to Enlarge +Meet Joshunda Sanders, Author of I Can Write the World

"Your intuition is your higher power talking to you—listen to it." These words from our December author of the month Joshunda Sanders are intimately reflected in her latest work, I Can Write the World, and its portrait of Ava Murray, a young black girl growing up in the Bronx. Ava, a naturally curious and inquisitive mind, aspires to become a journalist—to tell the stories that are not being told and that are true to her own lived experiences. In this way, she is a reflection of Sanders, who also grew up in the Bronx, and who has spent her career as a writer investigating issues of media ethics and social justice through journalism and literature. Joshunda's work has appeared in such publications as TIME, Kirkus Reviews, The New York Times, and dozens of other anthologies, newspapers, textbooks, and encyclopedias. She has taught courses on writing and journalism, and she also serves as an advisory board member for ABC-CLIO's The African American Experience database. I Can Write the World is her first book in a series of children's literature, and it received a highly recommended review from SLC. Read on for our exclusive interview, in which we discuss I Can Write the World, the Bronx, and the importance of media literacy in an age of deteriorating ethical standards in journalism.

Thank you for that. I think about this a lot, actually, especially as I've started to write for children—which is the most challenging genre for me, because of how innocent and wise young people are, despite the fact that our culture often takes for granted how much children take in. I've learned the most about writing craft, discipline, and discernment (by which I mean when to move forward with an approach to a piece of writing and when to pivot, but there are a lot of different kinds of discernment) from my time as a newspaper reporter and my work as a speechwriter. What both of those types of writing have in common is that they require a kind of active listening and an almost exacting transcription of the stories and voices of others in order for you to get as close to the truth (or their truth, I suppose) as possible.

About where I feel most at home, genre-wise: It's a tie between short fiction and personal essay, with the latter being probably the place where I feel the most confident and at home. I came to writing by way of journaling, which also emerged out of being immersed in consistent silence and solitude. That meant I had a lot of time to listen to myself, to practice putting my voice on the page and to see how that voice changed over time. Fiction is a bit harder because it requires more than listening and confidence, but also an interesting combination of faith and patience. Faith, because you have to really believe in yourself and in the voice that the story wants to convey, and patience, because it may take a day or two, a week or a decade before a story unfolds in the way that it's meant to be in the world.

What many people don't know about the Bronx is that it's the only borough in New York City—the biggest city in America—that is not an island. That is, it's the only part of New York City that is actually a part of the contiguous United States. What I love about this fact is that even though this is the case, the Bronx is the most neglected borough (aside from, arguably, Staten Island). It is home to the poorest congressional districts in the country, and there are shameful levels of poverty and low levels of educational attainment, exacerbated by decades of governmental and economic disinvestment.

What makes the Bronx special to me is that I spent the bulk of my young life there; I grew up quite poor, economically, but the people, the culture, the richness of the personalities, the resilience, smarts and talents of the people of the Bronx, especially those from throughout the African Diaspora, are not defined by lack or statistics. We're defined by how we lean on community, on the affirmation of people who look like us, to continue to thrive. The Bronx is special to me because even though it's an underdog place in a city that prefers champions, everyone, anywhere on Earth, loves it when an underdog becomes a winner. I learned that growing up here, and I keep that fire in my belly.

Thank you; it wasn't until I had the great honor of sitting on a panel at the 2019 Bologna Children's Book Fair with Rudine Sims Bishop, whose beautiful description of books as windows preceded Kim's description in the book, that I thought more about the significance of how we talk to children (or don't talk to them) about how stories are framed, or shaped.

I think that it's fairly recent in society—adjacent and aligned with the rise of social media—that everyone sort of considers themselves a journalist. When you think about it, journalists are witnesses, people who report what they see. So in a way, everybody's right. What everyone doesn't necessarily have, though, are the ethics that go along with what professional news gatherers have—this inclination to shine a light on injustice and unfairness. Most news reporters get into the business (and it is increasingly considered mainly a business) with the aims of comforting the afflicted and afflicting the comfortable. But I think the reason why news more often resembles propaganda now has to do with a kind of commodification of truth and certainly of news. Integrity or nobility are less emphasized than they used to be because most media moguls are looking for revenue to survive in an environment where no one thinks they need an intermediary for news.

One thing I think all of us could do more of is to consider how powerful our platforms are, whether you think you have one or not. All of us who write, for example, have presences online. How can we use that to help others share their opinions or their stories more mindfully? Sometimes it's as simple as asking these questions, which I love and did not originate with me: "Does it need to be said? Does it need to be said now? Does it need to be said by me?" The other thing is if we are all journalists, now, it shouldn't just be when it's comfortable or cute, but all the time. Ask more difficult questions. Who is the source of this information? Are they lying to me about their objectivity? Why do I believe them? Why should I believe them? When in doubt, find your own credible sources and go with that.

I heard this once and it never left me and it has been incredibly helpful in my career: Your intuition is your higher power talking to you—listen to it. Put another way, trust yourself. There's so much advice, so many blogs, and influencers and blah blah blah out there telling you how to do a thing. And there's certainly a place for all of it. Lord knows, I have consumed all of that stuff over the course of a long career. But at the end of the day, only you know what will work for your life. You are the CEO of your enterprise, and your life and your work belong to you first. When you trust yourself, you can be proud of whatever happens, because you know the guidance came from a fantastic, reliable source.

What I want to point out is about Ava's name. In places like the Bronx, there are so many resonant, beautiful and unique names. Like mine, they are usually a combination of names or words chosen by parents who were trying to infuse meaning and purpose and love by grafting poetry onto the names of their children. Ava is named for the pioneering and phenomenal filmmaker Ava DuVernay, whose amazing, award-winning film, When They See Us, should be required viewing like all of her work; and Pauli Murray, a legal pioneer and Episcopalian priest who never got her just due for pioneering an intersectional framework in law by introducing "Jane Crow" into the legal lexicon. Ava is named for these powerful Black Renaissance figures because they have created worlds just like she aims to do.