Refining Our Mock Caldecott: Tips from the Frontlines
by Tom Bober

Serving on the Caldecott Award committee has been a dream of mine almost as long as I was aware of what those gold seals meant on the cover of favorite picture books when I was nine years old. And now, that dream has come true! On Monday, February 12, our Caldecott committee of fifteen members gathered around a speaker phone in a small room at the convention center in Denver, Colorado, and called each illustrator to tell him or her the news: they were going to receive a Caldecott medal or honor! Their enthusiasm matched our own and it was such a special moment.

All the honorees who are able will attend the annual convention of the American Library Association in New Orleans in June, where each illustrator will receive her/his award and the medalist (Matthew Cordell) will make a speech at the fabulous banquet on Sunday, June 24. Come join us!

Meanwhile, how did this all come about and what was it like?

Just in case you didn’t know, the Caldecott Medal is an award given annually by the Association for Library Service to Children (ALSC) and was named in honor of nineteenth-century English illustrator Randolph Caldecott, who is known as one of the first artists to have infused lively action into his illustrations for children’s books. The award is presented to the artist of the most distinguished American picture book for children and is subsequently purchased by nearly every library in the U.S. Personally, I felt such pressure in hoping history would judge us kindly for our choice!

A Year of Reading

Being on a book award committee is a pleasure and a privilege and quite a lot of work. You spend a year receiving brand new books in box after box after box. (Such a pleasure!) And then you store, read, and reflect on those books. All year long, the committee—and others—makes “suggestions” of books that should receive a closer reading and examination. Our committee chair constantly compiles and revises those suggestion lists and shares them with all of us so that we can be sure we’re reading them all. We can share the books with students, read them to children at storytimes, and talk about them with others. But we must keep confidential whether the books are suggested, recommended, or liked us or by our committee.

Along the way, I also read reviews and blog entries and digital posts about all the books we were reading and considering. I kept a digital notebook with notes about each book, comments from reviewers, etc. We also raised questions about eligibility for the books we were considering, particularly regarding whether an illustrator or title could be considered. The Caldecott criteria specify that it is “restricted to artists who are citizens or residents of the United States. Books published in a U.S. territory or U.S. commonwealth are eligible.” The illustrator doesn’t have to be an American citizen but must be a regular “resident.” In a world where people move fluidly across national borders, we had to check that several times.

We pored over the Caldecott manual often and sought guidance from our “priority consultant” with ALA. In particular, we considered what “distinguished” truly meant. The manual specifies:

You may be surprised to learn that the Caldecott Award Selection Committee meets face-to-face only twice and both meetings occur at conventions of the ALA. We met at the annual conference in the summer to consider the criteria, the manual, and particular questions and to share tips. We individually presented books that are NOT eligible, so we can get practice in presenting Caldecott contenders. These are not booktalks focused on the story or plot, but rather a close look at the illustrations and how they contribute to the story and the book experience overall.

Then… drum roll… we met again at the midwinter conference behind closed doors for three days (and sometimes nights) of close, careful, and critical book discussion. We brought snacks (often regional treats from our home area), we took short breaks, and we kept going. At the end, we voted (often several times) until we had met the mathematical criteria for the weighted vote and spread of points. We used this careful process to select the medal book, as well as the honor books.

Once we had made our decisions this year, we took several fun committee photos and worked together to write the press release for ALA. And then we had to keep that all secret until we phoned the winners on that Monday morning just prior to the press conference where the announcements become official. Then we sat together at the press conference as a committee and whooped and cheered and hollered when our books were announced (and for other winners, too, of course).

And the Winners are... 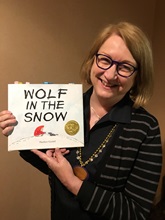 We chose Wolf in the Snow by Matthew Cordell for the Caldecott Medal. It’s a beautiful wordless picture book that blends elements of Little Red Riding Hood with Julie and the Wolves and a dash of Sylvester and the Magic Pebble. A young girl rescues a wolf cub in a snowy storm and reunites the cub with its pack. Then, in turn, that pack protects the girl when she is lost until she is found by her family. Loose pen and ink drawings, watercolor washes in shades of blue, along with splashes of bright red, create a page-turning story of survival and empathy.

Crown: An Ode to the Fresh Cut by Derrick Barnes, illustrated by Gordon C. James

A Different Pond by Bao Phi, illustrated by Thi Bui

One of the serendipitous things I love about the books we chose is that each illustrator has never been awarded a Caldecott honor or award, so new names are getting BIG recognition. Plus, you’ll notice the diversity of representation: African American artist Gordon C. James recieved his first Caldecott honor for Crown; Thi Bui is the first Vietnamese artist to be recognized for A Different Pond (check out Twitter to see the celebratory dance she posted); Jason Chin’s gorgeous book, Grand Canyon, was also an honor book for the Sibert award for nonfiction; and Crown was recognized with a Newberry honor for author Derrick Barnes, as well as a Coretta Scott King author honor for him and illustrator honor for James. And don’t miss Big Cat, Little Cat by Elisha Cooper, the most beautiful tribute to the precious companionship of pets and the heartbreaking cycle of life that I have seen in a long time.

And just like that, my Caldecott year is over!

Just a few years ago, I expressed interest in serving on this prestigious committee, was offered a chance to be on the ballot, was elected to serve, and then signed the ALA confidentiality and conflict of interest agreements. And of course that came after several years of serving on other working committees and participating actively in the life of ALSC. It was everything I hoped it would be!

Now that our work is done, our committee is giving away our mountains of books to those who can use them the most. Mine went to the library at Little Cypress Elementary School in Orange, Texas, a school completely displaced by Hurricane Harvey and rebuilding from the ground up. And, of course, we’re sharing our joy in the new books we selected and in the timeless beauty of the “most distinguished American picture books for children.”

Experts have compared picture books to theater with the drama of the page turn and called them a kind of art museum for the young child. I agree! Picture books have it all: story, art, culture, and drama, as well as connections to the special people who share them with us. They are our first and most memorable book friends in a long lifetime of reading, so let’s give children the very best whenever we can (for a start, check out my editor's picks for the Caldecott Medal winners from 2014-2018).

See photos of all the fun we had on my blog: https://poetryforchildren.blogspot.com/2018/02/caldecott.html

More Information on the Caldecott Medal:

is Professor in the School of Library and Information Studies at Texas Woman's University and teaches courses in literature for children and young adults. She has authored or co-authored more than 100 published articles, more than 25 book chapters and given more than 150 presentations at national and international conferences. She is the author of Children's Literature in Action: A Librarian's Guide, Poetry Aloud Here!, The Poetry Teacher's Book of Lists, Poetry People, co-edits The Poetry Friday Anthology series (with Janet Wong) and maintains the PoetryForChildren blog and poetry column for ALA's Book Links magazine.