Introducing Graphical Literacy in the Library
by Tom Bober

I began my new career as school librarian at Southside Elementary in the Fall of 2016. I wanted to make a strong impression about the media specialist's leadership roles: promoting reading and literacy, supporting standards, collaborating with teachers, teaching information literacy with inquiry-based learning, and communicating with stakeholders. During my employment interview the principal repeatedly emphasized the goal of motivating students to read. She understood the strong connection between student reading and achievement test scores. The school district had recently purchased licensing for an online literacy environment with over 5000 eBooks. The directive from the district media program specialist to school librarians: maximize use of this resource to improve student reading and learning.

My work was cut out for me. Temporarily housed in a classroom during renovation, the school library, although functional, had limited shelving, only five desktop computers for student use, and insufficient space to host a full class. The new reading platform had the potential to significantly boost resources available to students. This was its rollout: students, teachers, and administrators would have to learn how to use it with my help.

In preparation for my new job, I had studied the K–5 curriculum maps and noted that third-grade students learn how to graph in math and how to use graphs and diagrams in science. I wondered if third-grade teachers would collaborate on a project to create graphs based on library statistics. Students would get real-life, hands-on experience with graphing, and I could use the graphs to demonstrate progress toward goals and to communicate with the school community. The third-grade lead teacher said the math standards did not focus on graphing until the fourth marking period and suggested we wait until then. Eager to get started and envisioning a year-long project with monthly graphs, I approached fourth-grade teachers who quickly agreed to participate. Although graphing is not addressed in fourth-grade math, it is included in fourth-grade science standards:

S4CS4 Students will use ideas of system, model, change, and scale in exploring scientific and technological matters.
b. Use geometric figures, number sequences, graphs, diagrams, sketches, number lines maps and stories to represent corresponding features of objects, events, and processes in the real world

Further, students are expected to use graphs to analyze and interpret data during the fifth grade and on end of year achievement tests.

In addition to meeting curricular standards, the graphing project addressed AASL's Standards Framework for Learners including 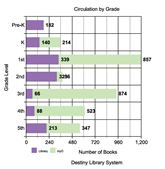 For one week at the end of each month, five new fourth-grade students met with me in the library for a half hour each morning. On the first morning, we discussed the project and students read several nonfiction books about graphing. Tiger Math: Learning to Graph from a Baby Tiger, although an older book, engaged students with a real-world example of graphing's utility. This story of a tiger cub's failure to thrive captivates students and presents important data in pictographs, pie charts, and bar and line graphs. On the second morning, we collected circulation data from the Destiny Library Management System and from the online reading platform. Students used their math skills to calculate total numbers of books read and circulated as well as subtotals for each grade. On the third and fourth days, students analyzed data and brainstormed how to illustrate conclusions using different kinds of graphs. By drawing rough sketches of their graphs, they were able to determine which format to use. For instance, they realized that a line graph best demonstrates changes over time while a pie chart is better for depicting percentages. On the fifth day, they used the National Center for Education Statistics' Kids' Zone Create A Graph (https://nces.ed.gov/nceskids/createagraph/) to make bar and line graphs and a pie chart. Students drew conclusions from the graphs, discussed possible reasons for changes in circulation, and suggested ways to increase readership. Using a poster-making machine, they transformed selected graphs into posters to display outside the library entrance.

Students, teachers, parents, and administrators stopped by to see and discuss the graphs. Clearly communicating students' reading progress, the graphs were on display outside the library when community partners judged the science fair, the superintendent visited the school, and the board of education toured the newly completed school library.

By the end of the year, students had checked out from the library and/or read online almost 26,000 books. This doubled the number of books checked out the prior year. With a student population of 430, this is an average of 60 books per student.

Through this ongoing graphing project, I met all the principal's, the district's, and my personal goals. Motivated digitally, visually, competitively, and personally, students read unprecedented numbers of library books and made excellent use of the new online literacy environment. The graphs showcased students' achievements in creating graphs and in reading and communicated important work being accomplished in the school library.

Because I worked with five students on the project each month independently, the teacher and I did not truly collaborate; rather, we cooperated. Yet this experience of cooperation has moved us closer to collaboration. By demonstrating familiarity with curriculum standards and devising a lesson that supported and reinforced what third- and fourth-grade students were learning in the classroom, I established myself as an instructional partner and leader. When later I approached first-grade teachers about collaborating on a standards-based project, they readily agreed. Toward the end of the year, a second-grade teacher asked for help with a unit and the third-grade lead teacher expressed interest in graphing. I have promised to work with them and other teachers in the coming school year.

Whitney N. Husid, PsyD, is media specialist at Southside Elementary in Augusta, GA. She earned her Master in Library and Information Science at the University of South Carolina, and her Doctor of Psychology at Rutgers University. She is the co-author, with Dr. Virginia Wallace, of Collaborating for Inquiry-Based Learning: School Librarians and Teachers Partner for Student Achievement, 2nd ed. Her email address is husidwh@boe.richmond.k12.ga.us