We're glad you're enjoying School Library Connection.
Access the rest of SLC & thousands of more resources like this one.
Already a subscriber?
SIGN IN
OR
Learn how to become a subscriber here.
Meet Gareth Hinds, Author of The Iliad 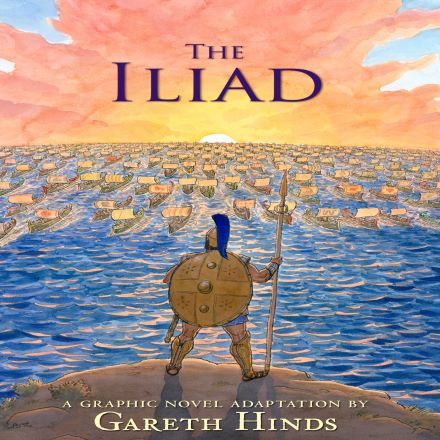 Click to Enlarge Meet Gareth Hinds, Author of The Iliad

Our June Author of the Month is author and illustrator Gareth Hinds. Gareth brings new life to old classics of literature with his critically acclaimed graphic novels; some of his adaptations include Beowulf, the stories and poems of Edgar Allan Poe, and several works by Shakespeare, including Macbeth, King Lear, Romeo and Juliet, and The Merchant of Venice. In 2010, his adaptation of The Odyssey was named a Booklist Top Ten Graphic Novel for Youth and a Kirkus Reviews Best Teen Book of 2010. His latest work, The Iliad, returns to the roots of the Homeric tradition with a visually stunning rendition of the legendary Trojan War (read SLC's highly recommended review of the book here). The book is an authentic recreation of the original epic poem—a visual tribute to Homer's gods, heroes, and timeless themes of love, honor, and conflict. I recently had the chance to speak with Gareth about the book, his creative process, and the increasing relevance of graphic novels for teachers and librarians.

I grew up with art and literature and the combination of both. Actually nothing I'm doing is new. There's a huge tradition of illustrating classic stories, and I grew up seeing that in all different formats, including picture books, illustrated children's collections of myths and legends, beautifully illustrated editions of classics like Le Morte d'Arthur or Gulliver's Travels, and so on. In school I studied art history and saw that classic stories have always been a popular, if not dominant, subject for artists (especially if you count the Bible), though only recently have they taken the form we'd call graphic novels.

In high school I had some great literature teachers who turned me on to books like Beowulf and The Odyssey, and I loved those old stories with their mythological, archetypal elements and their rich details of life hundreds / thousands of years ago. I also read a lot of comics from different traditions—not just the American mainstream like Archie or Batman, but indie and underground comics, European comics, manga, and so on. I read some of the Classics Illustrated series, which adapted practically every literary classic into a 48-page comic format. I liked that idea but I found the stories too compressed and the art didn't always match the tone of the story. My favorite of that series was Moby Dick, illustrated by Bill Sienkiewicz, and I thought that book showed what was possible with adapting literature into comics.

In my senior year of art school I had to pick a thesis project, and I decided to do a comic adaptation of a Brothers Grimm fairy tale, Bearskin. I had limited time and wanted to focus on the illustration and the storytelling rather than inventing a story or researching a nonfiction topic. At the time I was reading the Complete Grimm through the lens of Robert Bly and others who were re-examining the psychological value of fairy tales. Bearskin was one of my favorites and I thought it would be a lot of fun to draw—which it was! Out of everything I did in college, that was the project that stood out the most, and that people responded to. So then I thought about what else I might adapt, and Beowulf was the answer. That was my breakout book, and I discovered that educators were really excited about having it as a tool to introduce young people to the classics, so I decided to continue in that vein. 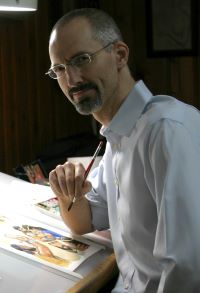 Click to Enlarge Meet Gareth Hinds, Author of The Iliad

I stick very close to the original, and I don't have to force myself to do that, because I love these stories. I only change things as much as I really need to, to get the text short enough and to preserve the emotional range and power of the original in a different medium.

A lot of prominent scholars are of the opinion that Homer wasn't a real person, and that in the long line of oral storytellers who developed The Odyssey and The Iliad, every bard who sings the epic essentially is Homer. So in that sense, it is Homer's and it is mine because I am also Homer! But I put my name on the cover ;-)

I think Odysseus is the most entertaining character, because he gets what he wants by cleverness or by force, whichever suits the situation, and Homer tells you right up front that he's a liar, a trickster, a man of many twists and turns, but you still want to believe his stories. I probably wouldn't like him so much in real life though. He's not very nice or very good at taking care of other people. I think the most heroic characters are probably Hector and Patroclus. The characters I find the most fun to draw are Athena and Thetis.

My hope is that in this format it will be a faster, richer, and more pleasant experience to lead kids through these texts, and so I hope that teachers will be able, and will choose, to teach both The Odyssey and The Iliad in the same time it would've taken them to do one or the other previously. The graphic novel helps level the playing field for the kids who have learning differences, are ELL, or just aren't reading at the same level as their peers. And it can help teach visual literacy, which is increasingly a formal part of the curriculum.

Having said that, I know a lot of teachers who let students choose which version they want, or who simply show my books at the beginning of the unit to get the kids interested, and then they read the full text as usual—hopefully with less resistance. I'm not saying anybody should replace the original, I'm just providing another tool.

I hope they will love these stories the way I did when I read them, and that they will then choose to re-read them sooner and more often, because in my experience, every reading yields new treasures. Maybe they will also be motivated to draw their own stories.

At the moment, I'm taking a break from the classics to adapt and illustrate a contemporary YA novel, Graceling by Kristin Cashore. But I'm always interested in knowing which classics are being taught today and which ones people would most like to see as GNs. I'm taking notes on what gets requested the most, for when I return to the classics. So I'd like to hear from my readers about the books you most want.